SDL Trados Studio 2019 is finally here! Over the next few days and weeks, we will be hearing about the new features and how the SDL team has worked to make the user experience better.

One set of new features that has immediately improved my own user experience is the one around project and file management. In this post, I'll explain three tasks that have been made simpler and faster in SDL Trados Studio 2019: Creating a new project, Adding a file to an existing project and Updating an existing file in a project.

It's immediately evident that the new wizard offers a lot more information and options. The initial screen gives us options to select the project languages, base our project on existing templates or previous project settings, name our project, select its location, and add files or folders, effectively allowing us to create a new project in one step. 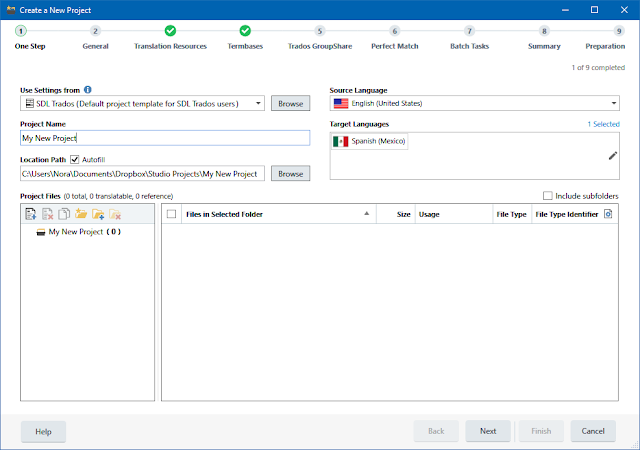 Across the top of the new wizard we see 9 metro stations, each representing a different step in project creation. Should the one-step option not be enough, we can further customize our project settings by either clicking Next and running through each of the stations or by clicking on the appropriate station.

For example, here's what I see after I click on station 4: 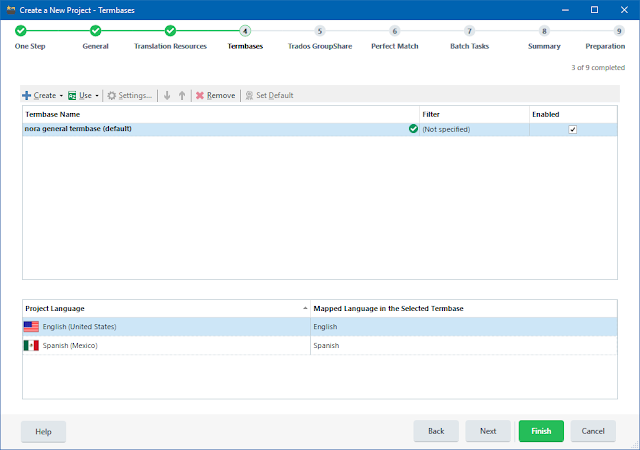 After clicking Finish, which can be done at any point in the process, the project is created and we're presented with the following screen: 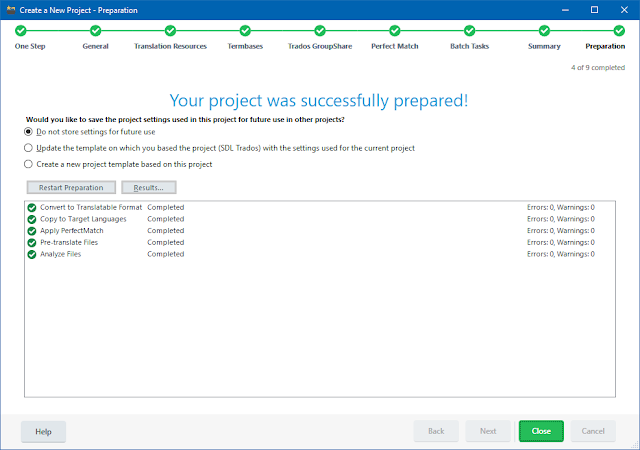 Now, you may notice those two buttons above the batch task list and wonder what they're for. In fact, the buttons are there in SDL Trados Studio 2017 as well, but they're less prominent, so this is not a new feature, just new placement of those buttons. Restart Preparation will only become active if something fails during the project creation process and the files need to be prepared again. Results will become active when you select one of the completed batch tasks, as shown below.

2. Adding a new file to an existing project

There's an enhancement in SDL Trados Studio 2019 around adding a new file to an existing project that may not seem like a big deal, but has already proven to be a time-saver for me.

In past versions of SDL Trados Studio, adding a new file involves 1) adding the file, 2) manually preparing the file for translation by selecting the appropriate batch tasks, 3) switching to the target language once the file had been prepared. This last step causes a lot of confusion among new users, who are often puzzled about why they can't open the file for translation after preparing it (answer: they're still in the source language view), and usually resort to measures such as closing and restarting Studio.

With the new Quick Add Files option, one simply selects the file and SDL Trados Studio 2019 handles steps 2 and 3 above. The process is so quick that it's often a "blink and you'll miss it" sort of situation, where it seems like I've just added the file and it's already showing in my target language, prepared and ready for translation. 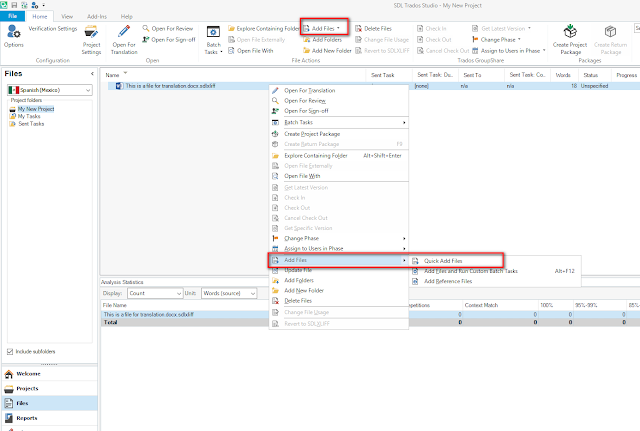 See it in action here:


Note: For the Quick Add Files feature to work, files have to be added using either of the two options mentioned above. Files that are added via drag and drop will not be automatically prepared by Studio.

3. Updating an existing file in a project

This is another enhancement that I really like. I sometimes have clients send me an updated version of a file I'm already working on. In past Trados Studio versions, replacing the old file with the new one required several steps: 1) going to the source language, 2) deleting the old file, 3) adding the new file, 4) preparing the file, 5) switching to the target language.

With the new Update File feature in SDL Trados Studio 2019, this is all done in a couple of clicks. To access the feature, we need to select the file that will be updated, right-click and select Update File, then select the new file. After that, Studio 2019 handles the entire process for us.

Here's an example. I have the following in my original file:

When I receive an updated file from my client, I follow the Update File process, as shown here:


After this, when I open the file, I have the following, which includes the new text added by the client:

There are several other exciting new features in SDL Trados Studio 2019, which I hope to explore in future posts, but for now, I hope you'll find the project and file management features as useful as I have.