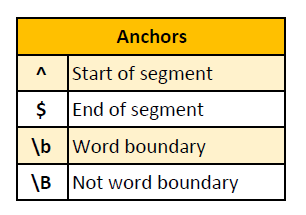 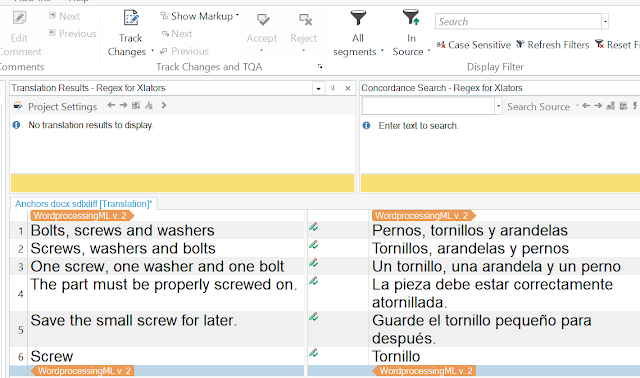 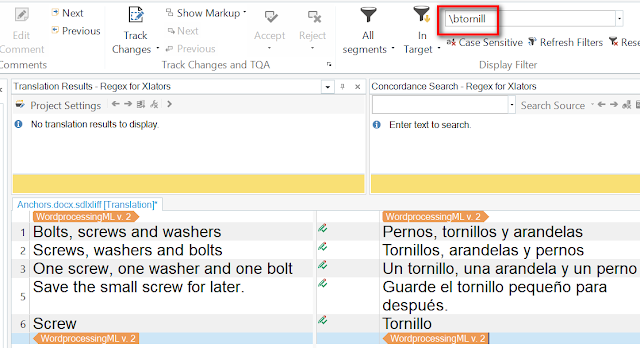 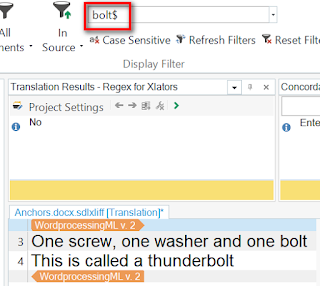 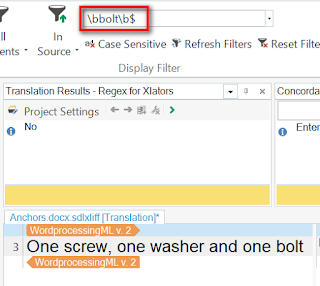 In regular expressions (regex), a new line break (or soft return) and a tab are represented with the following special characters:

In a program like SDL Trados Studio, regular expressions can be used to:

1) Filter on segments that match a certain regex

2) Find text that matches a regex

Let's use the new line and tab special characters to look at a few examples of these applications.

1) Filtering on segments that contain a new line break

So, if we have a document that looks like this: 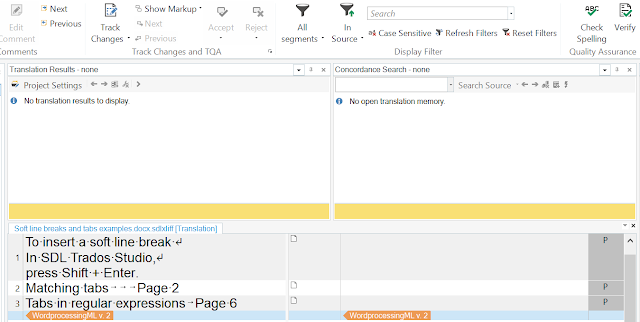 To do this, the regular expressions checkbox in the Find dialog box must be checked. This example shows the results of the search. 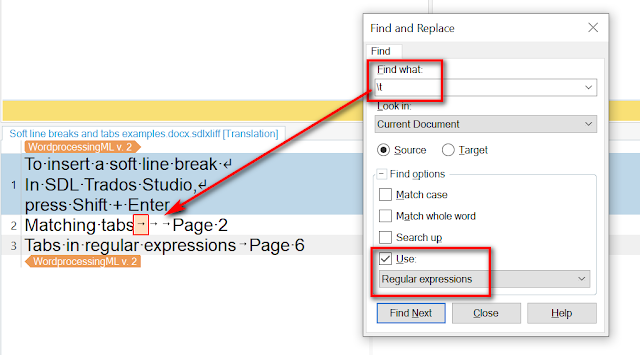 Once we learn that we can use regex in the Find dialog box, a natural question is whether the same can be done in a replace operation. The answer is a bit disappointing: while the Find field accepts all kinds of regular expressions, the regex syntax accepted by the Replace field is very limited, so, in short, no, you can't do the same in the replace field, that is, you can't replace a tab character with a new line character using regex, for example. In fact, if you enter "\n" in the replace field, that will be interpreted literally as "a backslash followed by an n", and that´s exactly what will be used in the replacement.

SDL Trados Studio's out-of-the-box verification options include the ability to add regex patterns to flag potential errors. In the example below, a rule has been created to tell Studio that when a new line character is found in the source, it should also be present in the target. 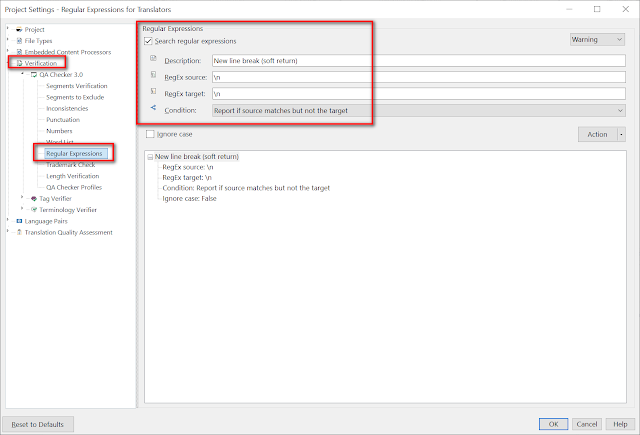 With the rule in place, once the verification is run, the program will identify any instances where there is a new line character in the source but not in the target. 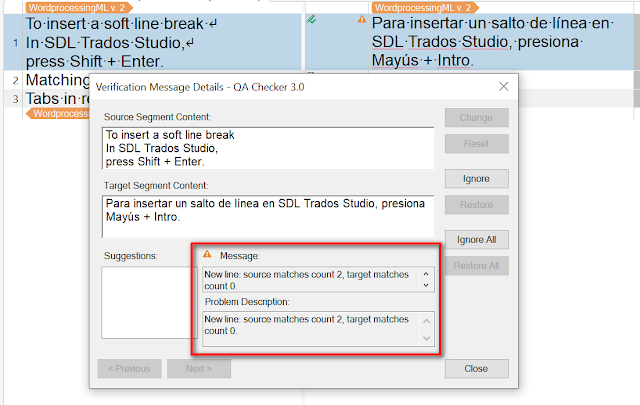 There are some cases where creating new pattern-based segmentation rules is desirable. A new segmentation rule for line breaks (soft returns), for example, would look like this (there's a dot in the "After break" section, even though it's hard to see): 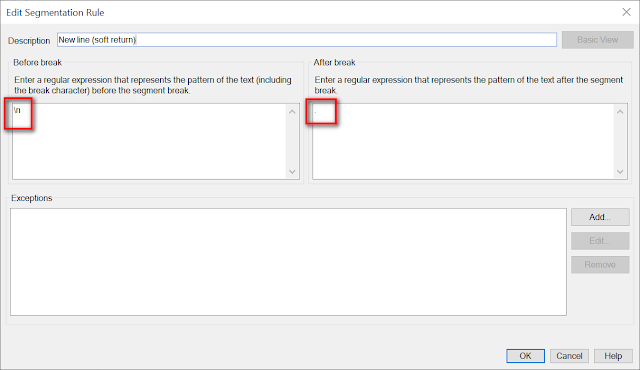 Final words
While the examples in this article use only the tab and new line characters, all kinds of complex regex patterns can be used in the four features that make use of regular expressions in Studio (display filter, search, verification and segmentation), and while linguists don't need to be computer programmers, investing some time to learn the basics of regex will help them save time and work more efficiently.


If you’ve ever attempted to use a question mark or an asterisk in SDL Trados Studio’s display filter, you may have been surprised to get an error message that looks like this: 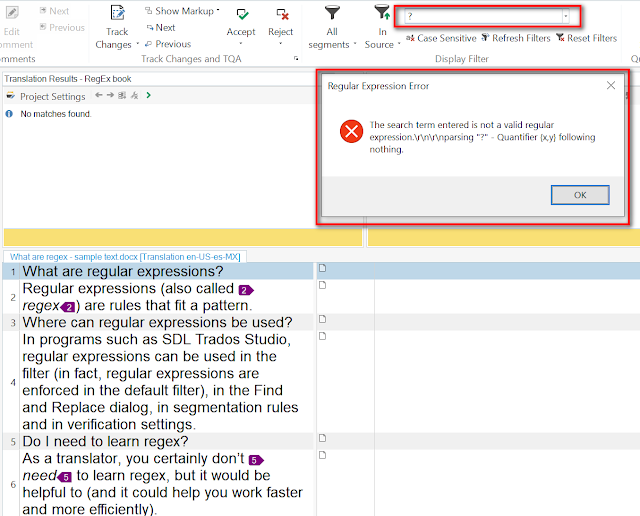 In fact, several of the characters below will trigger this message, while others will simply return unwanted results.

You can test this by creating a simple Word file that contains these characters, opening it in Studio and attempting to filter using each character. I’ve indicated the results you’ll get below.

Why is this? Because the display filter has regular expressions enabled by default, and all of these characters have special meanings when creating regular expressions. To learn more about the meaning of each character, have a look at my Regular Expressions for Translators Cheat Sheet. 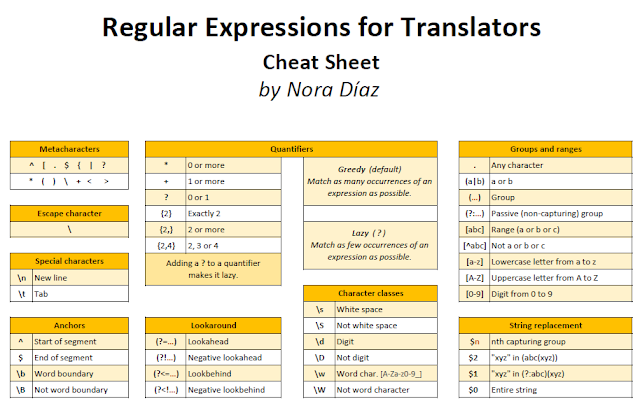 So, does this mean you can’t use any of these characters in the display filter? Not exactly. All you need to do is “escape” each of these characters whenever you want them to be matched literally. You actually do this by using one of those metacharacters: the backslash.

The screenshot below shows that after escaping the question mark character in the display filter, there is no error message and the filter is properly applied, displaying only the segments that contain a question mark.

Metacharacters that don’t need to be escaped

As you may have inferred from the test above, there are three metacharacters that don’t really need to be escaped: {, < and >. This is because their special meaning only applies when they are used in very specific ways. However, while it may be important for a computer programmer writing code to avoid escaping metacharacters when it's not required, for a linguist looking to quickly filter content while translating, editing or proofreading this is not so critical, so if it’s hard to remember which metacharacters to escape and which not to, simply escape them all.

Publicado por Nora Díaz a las 9:45 AM No comments: