I have always wanted to be able to add terms to a secondary termbase while I'm working in Studio. As we all know, this is not possible out of the box, but with a Dragon script, it is now as easy as saying "Add term to secondary termbase".


* For a very basic intro to creating commands, you may want to read this first.

I've created two scripts for this: one that pastes the source term into Multiterm, where the user will have to type or dictate the target term next, and another one that automatically populates the dictated target term, sort of like Add New Term and Quick Add New Term features in Studio, except that the terms will be added to whatever termbase is open and active in Multiterm.

Step 1: Create your commands in Dragon or KnowBrainer

Feel free to copy and paste the scripts below.

Command name: Add term <dictation> (if you haven't, please read the section about open-ended commands here)
Description: Adds the selected source term to a secondary termbase, inserts the dictated term into the target field, and saves the entry

Using your commands
Before running your commands, open your secondary termbase in Multiterm.  If the termbase is added to you current Studio project, you will have access to the terms you add as you translate. You can minimize Multiterm after doing this. 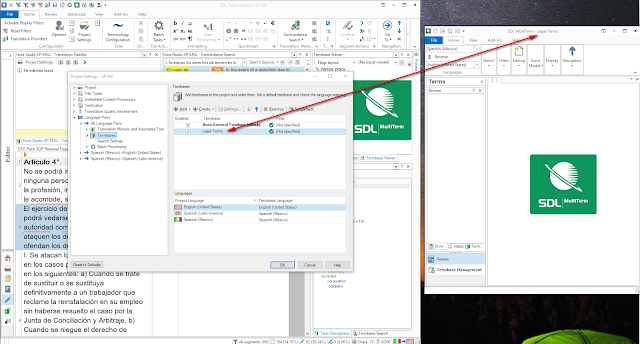 That's all you need to do. If you're using KnowBrainer, you will see the new commands in the Sidebar, ready to be used. KnowBrainer helpfully lists the commands available for the active program in its sidebar, and highlights the recognized commands as they are used. 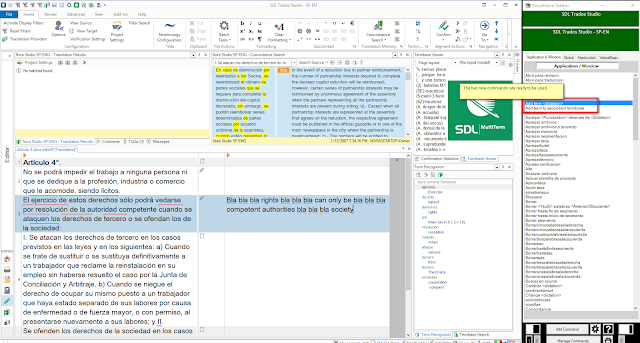 And to finish, here are the commands in action!

Let me start by saying that the beginner in the title is me. For the past couple of weeks, I've been learning and experimenting to increase Dragon's usability in Studio, a non-supported application. This will be a summary of what I've learned and a how-to for other users who may want to get started with some basic scripts. If you have no programming experience and feel this is too complicated, believe me when I say that if I've been able to do it, so can you, as my previous experience was limited to creating the odd Word macro, so I basically started from scratch.

I will also be adding some ready-to-use Dragon command scripts for Studio to this post so you can borrow them if you'd like and get up and running in a short time, rather than having to redo many of the things that I and others have done before.

Required Software
What will you need for these commands to work? Custom Dragon commands can only be created or added in the professional version of the software, so at the very least you will need one of the following:

1. Dragon NaturallySpeaking Professional (version 13 and higher if you want to use open-ended commands).

2. Dragon NaturallySpeaking Premium (again, version 13 or higher) + KnowBrainer 2016. KnowBrainer is a Dragon add-on that adds command capabilities to any version of Dragon,

To prepare these commands I have used Dragon Professional Individual 14 + KnowBrainer 2016. It may seem like overkill, as both offer command creation functionality, but KnowBrainer is a much easier to use repository of the Dragon commands, increasing ease-of-use and flexibility. A 30-day trial can be found here.

Creating Custom Commands
Dragon offers four different ways of creating commands. For this post, I will be focusing on the Advanced Scripting option, which is also the only option available in KnowBrainer.

Here are the Dragon and KnowBrainer Command Editor windows, side-by-side.

Dragon scripts are written in Visual Basic, so there are a few things that we need to know to write even the simplest of scripts. An important piece of information is how to enter the names of keys into a script. For example, what to enter if you want Dragon to execute Ctrl+C to copy selected text, or Ctrl+Alt+Right Arrow to select several words to the right of your cursor, or Shift+F3 to change case.

This is done through SendKeys statements, and that's the first thing I had to learn to get started, so that's where we will start.

There is a handy reference of all the keys and modifier keys you will need here:

Looking at this, we can see that Ctrl+C would be ^C and Ctrl+Alt+Right Arrow would be ^%{RIGHT}, and Shift+F3 would be +{F3}. That's the first step to start converting our Studio shortcuts into scripts. Whatever shortcut we want to emulate would be placed inside a SendKeys statement, like this: 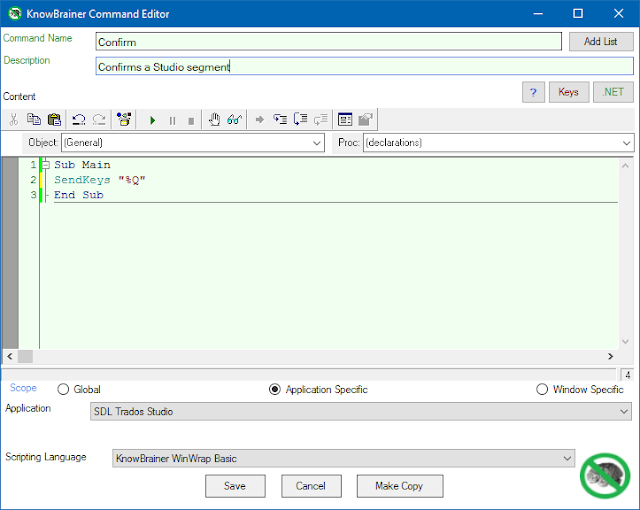 The example above is the command for my Confirm Segment shortcut in Studio, which, as you can see, is Alt+Q. The command can be customized to any shortcut (the key presses used in the script must match the Studio shortcut), and it can be named anything you want. To learn about finding and customizing Studio's shortcuts, Emma Goldsmith has a couple of excellent articles here.

The word(s) in the Command Name field represent what you will say to deploy the command. It's possible to copy the command and give the new copy a different name, so you can deploy the command with any of its alternate names. For example, I have 3 identical Alt+Q commands, called "Confirm", "Continue" and "AltQ". Note that all the user-entered code should be placed between the "Sub Main" and "End Sub" lines.

Notes about the SendKeys statement:
KnowBrainer offers a very useful feature called VerbalBasic Commands, which means that you can add lines of code by dictating them. Here is the list of some of the SendKeys coding commands:

Sample commands for you to try

As I said earlier, for the commands to work, the shortcut must match what you have in Studio, so if a command doesn't work for you, check your Studio shortcuts and make the appropriate adaptations.

To copy the commands, simply copy and paste the command code making sure your command begins with Sub Main and ends with End Sub. Remember that Sub Main and End Sub are already present when you open a new command window, so make sure not to duplicate them when pasting.

If a command name isn't working for you, here's a tip I got from an experienced user: change the name of the command to a single word, for example, change Add tags to segment to Addtagstosegment. That usually does the trick.

This is a very powerful Dragon feature that allows you to add your own text to a command.

When naming an open-ended command, the <dictation> part of the name cannot be typed or pasted, it must be selected from a list. This is because open-ended commands are a type of List Commands, which I will discuss at a later time.

Do the following when creating an open-ended command: 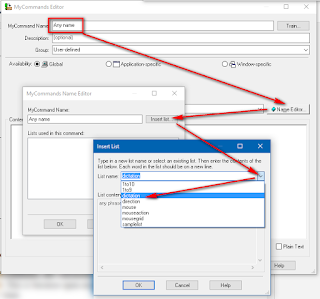 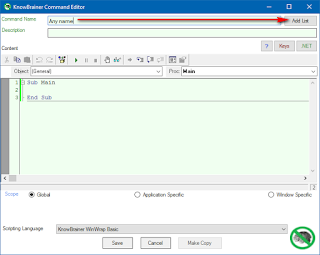 There should be no spaces between the command name and the <dictation> part of the name.

Special note about open-ended commands in languages with special non-English characters: To avoid issues with accented characters being dropped, for example, “construcción” being written out as “construccin”, all Spanish open-ended commands (those including <dictation> in the name) must be entered directly in Dragon, not in KnowBrainer, and must use SendDragonKeys ListVar1 instead of SendKeys ListVar1. See the examples below.

While all these commands are simple to implement, they significantly increase the functionality of Dragon in Studio and allow us not only to achieve text control, but application control as well.

In a future post, I will write about List Commands, a powerful way of consolidating commands with several variables into one.