Dragon Professional Individual 14 and Studio: What will you say?

While not every project is dictation-friendly, speech recognition can undoubtedly be a valuable tool for a translator. For several years now, I have used Dragon products in combination with SDL Trados Studio with varying degrees of success. While Dragon NaturallySpeaking never worked flawlessly with Studio, it wasn't until DNS version 13 that I lost practically all of the already limited text control capabilities in Studio.

What do I mean by text control? In fully compatible applications, such as Microsoft Word, it is possible to select, format, edit, correct and move text by voice using Dragon's built-in "select-and-say" commands. The video below briefly illustrates the use of full text control in MS Word.


In non-supported applications, such as Studio, however, select-and-say commands are not available. Compare what happens in Word, above, to what happens in Studio, below.

Dragon and Studio: A match not made in heaven
In addition to the lack of full text control, the interaction between Dragon and Studio (particularly Studio 2014) has been plagued with little problems, such as the need to dictate the initial cap command for every segment, which is no longer an issue thanks to Studio 2015's autocorrect capability. For a while, Dragon would insert extra blank spaces at the beginning of segments or just before any newly inserted text. It also dropped spaces, clumping words together here and there, and had a major conflict with Studio's AutoSuggest when Studio 2015 first came out. Some of these issues were annoying enough that I many times abandoned any attempts to dictate translations and went back to typing, which is disappointing, particularly because Dragon's accuracy, even without prior training, is quite high, and has been for the past few releases. I usually dictate in Spanish, my main target language, but I own the bilingual version of Dragon, where I can dictate either in English or in Spanish (a separate profile is created for each language), and even in my second language, English, Dragon does a superb job recognizing my non-native speech. (This post has been dictated with Dragon, with very minimal correction needed).

DPI 14: The new and improved Dragon
The product that I use used to be called Dragon NaturallySpeaking Premium, but in its latest iteration it underwent a name change and it is now called Dragon Professional Individual, a name that provides a hint to one major, very useful enhancement: In addition to improved accuracy and better recognition with laptop microphones, as well as improved stability, Dragon Professional Individual 14 includes the full custom command creation capability that used to be available only in the more expensive professional versions of Dragon NaturallySpeaking. 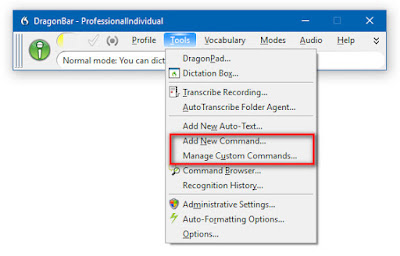 There are four methods that can be used to create commands:

1. Auto-Text, which provides basic insertion of text and graphics

2. Macro Recorder, which records mouse and keyboard actions in real time, and, unfortunately, deploys them in real time as well, although things can be sped up a bit by deleting parts of the recorded macro, such as mouse movements.

3. Step-by-step, a very easy way of creating commands for keyboard shortcuts, for example.

Commands can be global, application-specific, and even window-specific.

How well does it work? Amazingly well. I upgraded to DPI 14 a few days ago and after starting with a few basic Step-by-Step commands, I have been learning about and creating Advanced Scripting commands. So far, I have managed to create over 50 custom commands for Studio, some of which simply activate existing Studio shortcuts, and some others which manage more complex action sequences.

Here are a few examples:


To see the commands in action in Studio, have a look at the video below. Note how towards the end of the clip I try to say "Delete" to delete some unwanted text, but instead Dragon inserts the word "delete" into the segment, as there is no "Delete" command (actually, there is, but it only works in supported applications). A new custom command, which should take less than a minute to create, will take care of this.

KnowBrainer: A Dragon add-in for quick command creation
I'd like to finish this post by saying that while all these commands can be created in Dragon, I'm using a powerful add-in called KnowBrainer, which essentially allows you to create Dragon commands quickly, and comes pre-loaded with hundreds of ready-made global commands that can be used right out of the box or can serve as inspiration for more custom commands. An additional advantage I find in using KnowBrainer is that I can keep all my English and Spanish commands in one place. To make a command available in both languages, all I need to do is make a copy and give it a name in the appropriate language. While you can also have commands in both languages stored within Dragon, since you have to switch profiles to switch languages, only the commands that match the language in the active profile are loaded. Lastly, the creators of KnowBrainer host a very active, wonderful speech recognition forum where help and tips can be found both for Dragon and KnowBrainer. 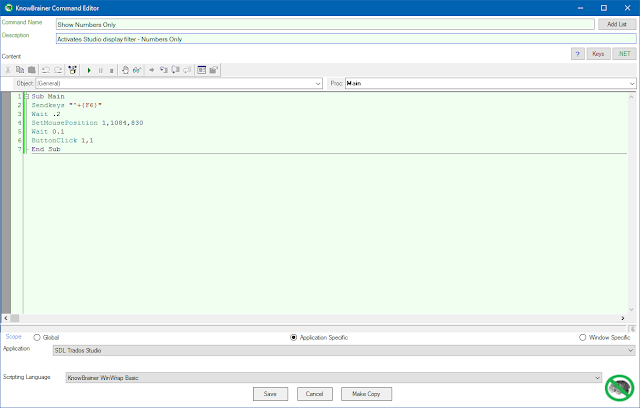 So, no more frustration and no more setting Dragon aside for days at a time. With this new version, Dragon has opened the door to new possibilities to make speech recognition a regular part of my workday.