Words Breaking Up Arbitrarily at Line End? Asian Language Rules May Be the Reason

After spending the better part of an afternoon troubleshooting some files, I'm writing this post both as a troubleshooting record for myself and to help others out there who may be facing the same issue, hoping it will save someone some time.

The Issue
I recently worked on a project involving a large number of MS Word files. The source text was in English, the files needed to be translated into Spanish. Our team used SDL Trados Studio for the translation and everything seemed to go smoothly... until we opened the target files in Word and started seeing some odd word breaks at the end of lines. Words were breaking up arbitrarily, as shown in the example below.

The Source of the Issue
As it turns out, even though the documents provided for translation were in English, the original files had been created in Korean. This means that Asian language features were carried over in the document paragraph styles. 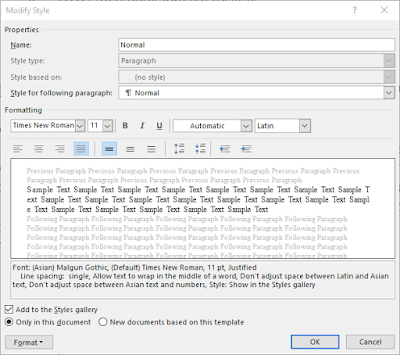 Of these, "Allow text to wrap in the middle of a word" seemed the likely culprit, but my usual paragraph settings didn't offer a way to disable it. To be able to do this, Asian Language Support had to be installed on my computer.

The Solution
The first thing I had to do was download an Asian language pack. I chose Korean because that was the language used when creating these documents.

To download a language pack in Windows 10, I went to my computer clock on the taskbar, clicked on it and selected Date and time settings at the bottom, then Region & language in the window that opens. On the right pane, under Country and region, I could see my installed languages, and clicked on the "+" next to "Add a language". Then found Korean and clicked on it. After a couple of minutes, when I could see "Language Pack Available" next to Korean, I clicked on it and then "Options". At this point the language pack is not yet installed on the computer, so the last button to click before this happens is the "Download" button under Language Options.

Once this was complete, I shut down and restarted Word (I'm using Word 2013).

I then opened one of my problem documents in Word, and right-clicked on the "Normal" style (Home tab - Styles group) and selected Modify. in the Modify Style window, I then clicked on Format - Paragraph. The dialog box that opens now has a new tab: "Asian Typography". And the second setting on this new tab is "Allow Latin text to wrap in the middle of a word". 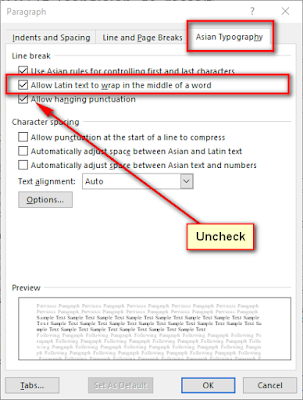 As soon as I uncheck the box, text wraps correctly.

Note: This setting may need to be changed for each individual style that shows this issue.