Interpreters must often juggle a number of tasks while in the booth, and communicating with others shouldn't be a cause for distraction, whether the interpreter is working on site or in a remote interpretation environment.

This post provides an option to simplify written communication between the interpreter and a boothmate, a technician or anybody else.

The list of phrases is fully customizable, and so are the abbreviations (hotstrings).

Here's a look at how it would work in WhatsApp (on a computer):

Follow the steps below to start using AutoHotkey text expansions right away.

Download AutoHotkey (www.autohotkey.com) and install it. Once installed, you won't see anything open. That's normal. AutoHotkey runs in the background and allows you to run your own scripts (macros), which are created in plain text editors, such as Notepad or Notepad++.

To use an existing script (download a sample script here):

1. Save the *.ahk file to a folder on your computer.

2. Double-click to activate it. Once the script is active, you will see a green square with a white H in it in your system tray. If you hover your mouse over it, you will see the name of the active script.

You are now ready to start using the expansions contained in that file. The sample file above, for example, contains the following: 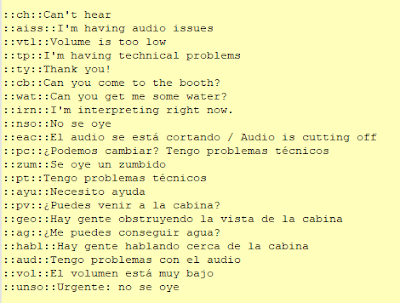 The text inside the two pairs of colons is the abbreviation, or hotstring, that you would use to trigger the full phrase, or expansion, which appears after the last colon.

In this example, if you type "tp" in any program or chat box followed by a space, tab, punctuation mark or Enter, the abbreviation is replaced by the expansion "I'm having technical problems". Using the same procedure replaces each of the abbreviations above with their corresponding expansion.

You can see the full list included in the file by right-clicking on the ahk file in Windows Explorer and opening it with a plain text editor (Notepad++ used for the screenshot above), so you don't need to memorize all the abbreviations, you just need to keep them handy.

Note that if you would like to change the abbreviations (hotstrings), you can easily do so, and you can also add your own phrases, so keep reading if you're interested in doing that.


To edit an existing script:

Scripts are edited in plain text editors, so in order to edit the script, follow these steps.

1. Open the script in a plain text editor.

2. Edit the script as desired, changing the existing abbreviations or expansions, or adding new ones. When adding new abbreviations, follow the syntax in the examples, placing your abbreviation inside two pairs of colons and your expansion after the last colon.

4. In Windows Explorer, double-click the name of the file to either load it, if not active yet, or reload it, if already active, to enable the changes.

Alternatively, after saving your changes, you can right-click on the name of the script in the system tray and select Reload This Script. 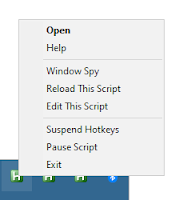 This context menu also offers you options to pause or exit the script.

To create a new script:

So far, you have the empty "skeleton" of a script. Now you need to enter the actions you want it to execute.

3. Right-click on the script and select Open, then open it with a text editor, such as Notepad++.

4. Once the file is open, you will see that there's already some text in it. Paste your script code in a new line below it.

5. Save the file. Now double-click the file, and this will load the script. Look for a green square with a white H in it in your system tray, which indicates that the script is active.

6. Now that the script is active, type your hotstring in any program or chat box to trigger the expansion in the script.

Text expansions is only one of the many things you can do with AutoHotkey, so I hope this short intro will help you get started and pique your interest to learn more about this great tool.

And lastly, if you're thinking that you would also like to enjoy text expansions in your smartphone or tablet, check out apps such as Texpand for Android or TextExpander for iOS.

The process to import an existing termbase into a translation memory in SDL Trados Studio involves the following steps:

1. Converting the sdltb file to an Excel file, which is easily achieved with the Glossary Converter app, available for free in the SDL App Store

2. Adding the Excel file to a project, making sure the Bilingual Excel filter is enabled

See the process in action here: